Ayano Yamane (pen name) or Eiko Naitou (real name) (山根 綾乃, Yamane Ayano) is the author of the Finder Series. She is a Japanese manga artist, best known for writing yaoi manga. Yamane is one of the top-selling yaoi artists in Japan. In addition to writing several manga series, Yamane has also illustrated light novels. She debuted as a manga artist in 1996, and first published the Finder Series in 2002.

Although her great success on the Boys' Love realm, she has been criticized by dozens of people on the way her story portraits sexual abuse as something romantic, while mocking and disrespecting victims. Not only that, as other BL authors, she has been accused for fetichizing gay relationships and gay men. 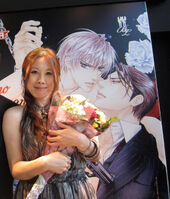